I'm happy to share that this blog now celebrates its second anniversary. Two years ago I started murze.be to share my bookmarks and interesting links I found with other developers. Along the way I started to write some articles of my own, mainly introductory posts to the now 100+ packages my team and I have released. Like in the last years anniversary post I'd like to share some numbers about this blog.

In the period spanning from november 2015 until november 2016 this blog served up 397 030 pages. In comparison to 2014-2015 that's a 400% increase. Though this blog being popular is not my main motivation is still pretty awesome to know that a lot of developers appreciate the links and articles that are being shared here.

In the middle of this year I also changed theme. Though some people let me know that the liked to old design better, I myself appreciate the calm of the current one. For fun here's how the site looked like earlier this year: 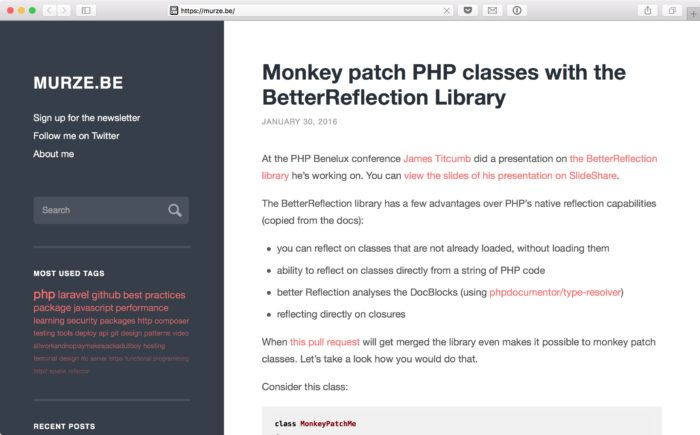 murze.be runs on a small DigitalOcean droplet. For the most part it had no problem handling the traffic. The only time it went down is when the post on DigitalOcean having lost a one of our servers reached number two on hacker news. It's a silly coincidence that a few hours before posting that article I had disabled WP super cache and forgot to turn it on again. With that plugin enabled the little droplet had no problem keeping the site up. At its peak more than 900 people were visiting this blog concurrently.

This is the top 10 of most visited articles on the blog in the last year:

Early 2016 I also started to offer a newsletter that's really nothing more than a digest of this blog. But a lot of people like reading it. Currently the mailinglist has 2 290 subscribers. The list has an open rate of 56,7% and click rate of 27,5%. I think that those rates are pretty good considering that a large part of the target audience is probably blocking Mailchimp tracking.

I still very much enjoy posting and writing on this blog, so probably we'll get to celebrate it's 3th anniversary.

What are your thoughts on "murze.be is two years old"?